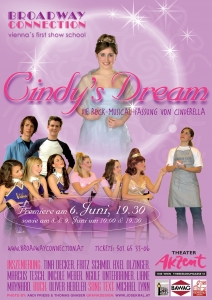 After the dead of her father Tom, Cindy is living with her stepmother Fricka and her malicious daughters Brünhilde and Sieglinde. Different to her two stepsisters, Cindy has to work hard alongside school. And of all things in Fricka’s Restaurant, which used to belong to Cindy’s father.

Furthermore, Fricka has all kinds of tasks for her. And that not enough, Cindy is also the outcast in school and has to suffer daily from derogative and malicious comments of Buffy, the head cheerleader and her friends Kristy and Ashley.

The only comfort Cindy finds is from her best friend Archie and the restaurant employees, who became her true family.

Her sad private life gets a wonderful spin when she meets her prince charming in a chat and starts conversing with him per SMS.

At the masked ball she discovers however, that her secret admirer is the most liked student of the entire school: heart-throb and football captain Jason.

Scared of fear not to be liked by him, Cindy hides her true identity and runs off the ball early.

But with all the excitement she forgets her mobile …

All that – and more in Theater Akzent …