Finally the audition for the Broadway Connections’ new musical “The Huntress” is coming up! Last year our young talents rocked the stage in three sold-out performances and delighted the audience.

Do you also want to be on stage? Then come to our audition and be part of the Broadway Company!

We hope you had a relaxing summer and are ready to start with us into the new dance year 2015/16. We proudly present our diverse course program that includes dance and fitness classes. You can start the new season motivatedly with over 100 courses for all age groups and levels. Start: 21st September 2015!

Our offer for all Children and Teenagers in the age of 2½ to 19 years.

To guarantee our high level of education, all classes run throughout the whole year and attendance is mandatory. In the first lesson or during trial lesson each pupil is placed according to their level to ensure an uniform education level.

In our classes you will learn and deepen the relevant dance techniques. Based on the learned, together with your class mates you will prepare 1-2 choreographies for the recital in the Theater Akzent. Your friends and relatives will be excited by what you can achieve in just 2 semesters!

Our Kids & Youth Academy is also the ideal preparation for the audition of our Competition Team. Come and do a trial lesson!

Our Competition Teams are for those that want to train even more intensive. Our team prepares you for national and international championships.

Admission criteria for the Competition Team is the passed Audition (8th – 18th September 2015) and a successful participation in the Contest Intensive Workshops.

You can find more information on our Competition Page.

Our Adult & Professional Program is aimed at two groups:

Dancers as of 16 years, with no or little experience book our classes for the whole year and learn the techniques of the relevant dance style. They prepare a choreography which they perform at the recital in Theater Akzent.

Fitness classes for all sporty people from the age of 16.

What are you waiting for? Register for one of our classes! If you are not sure, which class to do, cause try out a few trial lessons!

We congratulate the winners of our summer photo competition. In the last weeks there was a big fight for the third place and at the end we had two third places.

With a total of exactly 300 (super!) votes, Kati won the main price – a € 100 voucher for the semester fee. Viki is happy about a voucher of € 60. Angelina and Ella split their price and receive each a voucher of € 20.

We thank all the participants in our photo competition and all the voters. 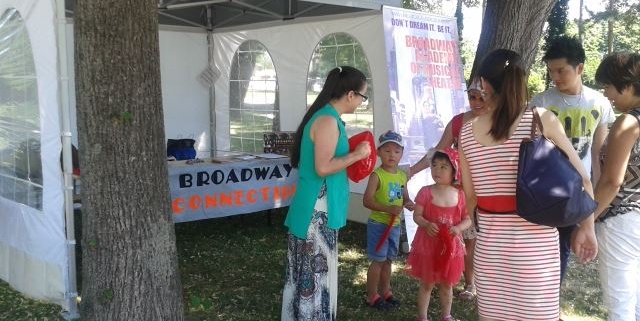 Also this year we are offering Dance Camps as part of the Wiener Ferienspiel (Vienna Holiday Games).

If you are still undecided then come to the Donaupark to the Ferienspiel kick-off event on Saturday, July 4th and Sunday, July 5th 2015.

For some of our Ferienspiel Dance Camps there are still empty slots. Therefore quickly register on our website for your favourite date: www.broadwayconnection.at/en/ferienspiel/

Percy Jackson – The Fight about the Golden Apple

We thank the young reporter Maria Poljak for the great article in the Kinder-Kurier about our Broadway Company Musical “Percy Jackson – The Fight about the Golden Apple”. Here the article to read (in German): kurier.at/lebensart/kiku/musical-der-streit-um-den-goldenen-apfel/

Thanks again to all the members of the Broadway Musical Company, both the actors and the production team!

If you also want to participate in our Musical Company then just come to one of our auditions on October 3rd or 10th 2015 at 1 p.m. To allow us proper planning of the auditon, please register online.

With as many as three (3!) excellent shows on Saturday, June 20th the Broadway Connection finishes the school year 2014/15:

Our Minis at the 25 Year Anniversary of the Akzent

In the afternoon, our youngest dancers demonstrated their skills and the educational variaty of the Broadway Connection at the 25 year anniversary of the Theater Akzent. Especially the young audience was excited and many grabed the brochure of our Broadway Summer School which offers dance opportunities as of 3 years.

We would like to take the opportunity to thank hereby the Theater Akzent, Mr Sturm and his employees for the great collaboration and support for our young artists. We wish many successful years of collaboration.

In the evening was the third sold out performance of “Percy Jackson – The Fight about the Golden Apple”, also at the Theater Akzent. The artists of the Broadway Musical Company –  authors, choreographers, singers and dancers – have again done great work and received large applaus.

For many artists of the Broadway Company the “workday” was not done after the curtain was lowered. They had to put on new make-up, some even during the trip to the next venue. And that was nothing less than the City Hall of Vienna!

The artists of the Broadway Connection entertained the guests of the 250 year anniversary ball of the veterinarian university of Vienna with an animal themed midnight show. Many VIPs from academica and politics saw a great vocal and dance performance of our “cats”. Special thanks to KrisTina Decker, who made nearly all of the costumes and wigs herself in numerous work hours. By the way, one of the customes is the original costume that KrisTina wore herself on stage. Can you guess which one it is?

Tingling sensation in your legs? Is summer without dancing too boring for you?

We got good news for you! In July and August 2015 the Broadway Connection opens it doors and welcomes you to our Broadway Summer School. There are many great courses, just pick the best! For all spontanous people we offer open classes in selected weeks. Details about them you can find shortly before on our web or Facebook site.

Details of our Workshop Program on www.broadwayconnection.at/en/broadway-summer-school/

How Do I register?
Just write down the course number and select it in our online registration form and hit send.